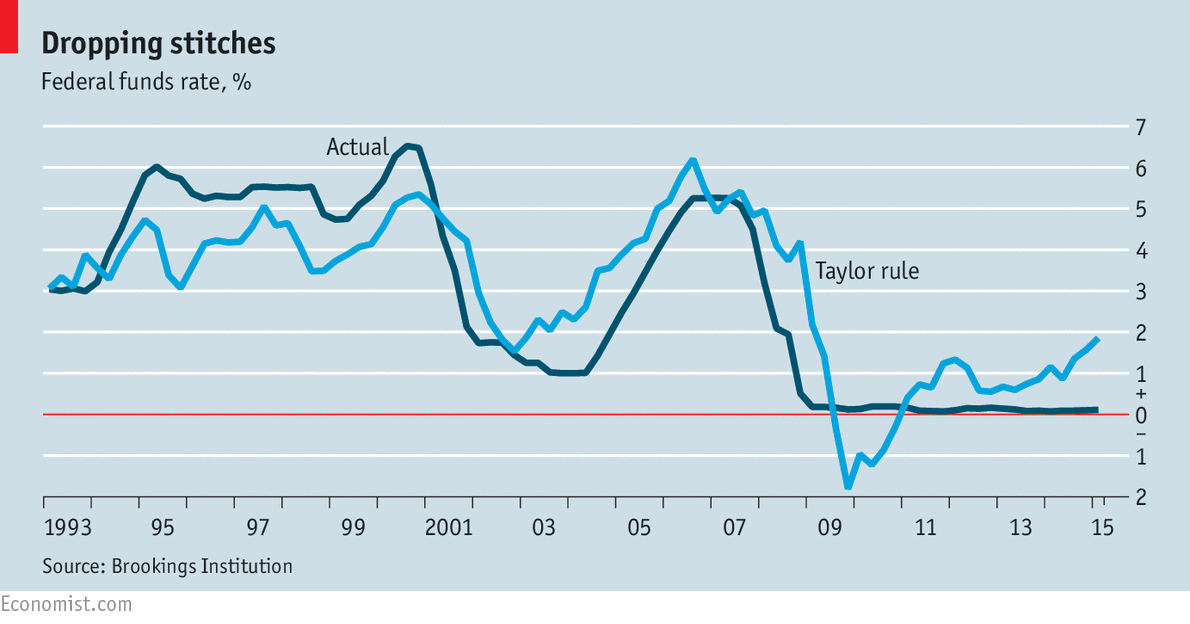 SHOULD experts in the public service follow rules, or rely on their own judgment? The answer is crucial for many areas of public policy, including criminal sentencing, immigration and education. It is also of pivotal importance to monetary policy.

Central bankers usually have discretion over how to use interest rates to achieve their goals. Yet it is easy to see the problems that result, as analysts pore over every word any central banker utters and markets see-saw in response. This tendency is becoming more frenzied as America’s Federal Reserve prepares to raise rates, issuing tantalisingly vague statements along the way. Some Republicans in Congress think it would be better if the central bank’s actions were more predictable. Jeb Hensarling, who heads the committee that oversees the Fed, frequently urges it to set interest rates using a simple formula.

This formula is remarkably good at predicting the Fed’s behaviour (see chart). Moreover, the Fed’s few deviations from the rule have not always been a success. Mr Taylor thinks the low rates of the early 2000s, for instance, inflated America’s housing bubble.

Monetary policy based on rules has one main advantage: transparency. The policy works by changing the cost of saving and borrowing. When rates go up, people are more inclined to save; when rates fall, they are more likely to borrow. When making these decisions, people care about tomorrow’s interest rate as well as today’s. The more they can predict how the central bank will act, the better they can plan—and the more likely they are to behave in the way that the central bank wants.

The benefit of transparency explains the policy of “forward guidance”—pledges by central banks, in the aftermath of the financial crisis, to keep rates low. Yet central bankers do not like having their hands tied. The Bank of England, for instance, listed no fewer than four reasons why it might abandon its own guidance, including runaway inflation and financial instability.

The need for such get-out clauses demonstrates the pitfalls of monetary rules. It is easy to see the optimal interest rate in an economic model (especially with the benefit of hindsight). It is much harder to understand how best to react to unexpected economic conditions. In 1987 the Fed deviated from the Taylor rule when stockmarkets crashed. From 2009 it deviated because it could not cut interest rates below zero, as the rule recommended. Research also suggests that the trade-off between inflation and unemployment evolves as the economy changes. If so, then any rate-setting formula would also need to change.

A recipe for disagreement

A similar problem arises with potential growth. Debate rages about the amount of slack left in Western labour markets. Economists do not agree on how much wages are constrained by part-time workers who want more hours, or on how much the labour-force participation rate, as well as unemployment, varies with demand. Estimates of slack are themselves the product of qualitative judgment. Plugging them into a rule would give a spurious impression of objectivity.

Those calling for a Taylor rule acknowledge these uncertainties. They stress that it would not have to be binding: the Fed could override it. But doing so would be to court controversy. Fed chairmen might not want to stick their necks out by deviating from a rule for too long. They are therefore right to see one as an unnecessary constraint on their autonomy.

If the public—or financial markets—cannot predict interest rates, it is because setting them is difficult. There is no overcoming that. If politicians want more scrutiny of Fed policy, the opinion of a well-staffed shadow body would make a better comparator than a formula. Until the day the economy is fully understood, human judgment has a crucial role to play. Algorithms are replacing many jobs, but they should not supplant central bankers.