Home Ownership Foundations are Being Shaken, and the Impacts Will be Felt Far & Wide

he nature of the centrepiece of the Australian housing system – owner occupation – is quietly undergoing a profound transformation. Once taken for granted by the mainstream, home ownership is increasingly precarious. At the margins, which are wide, it is as if a whole new form of tenure has emerged.

Whatever the drivers, significant and lasting shifts are shaking the foundations of home ownership. The effects are far-reaching and could undermine both the financial and wider well-being of all Australian households.

Over the course of 100 years, Australians became accustomed to smooth housing pathways from leaving the parental home to owning their house outright. However, not only did the 2008-09 global financial crisis (GFC) underline the risk of dropping out along the way, but more recent Australian evidence has shown that the old pathways have been displaced by more uncertain routes that waver between owning and renting.

The Household, Income and Labour Dynamics in Australia (HILDA) Survey indicates that, during the first decade of the new millennium, 1.9m spells of home ownership ended with a move into renting (one-fifth of all home ownership spells that were ongoing in that period). It also shows that among those who dropped out, nearly two-thirds had returned to owning by 2010. Astonishingly, some 7% “churned” in and out of ownership more than once. Many households no longer either own or rent; they hover between sectors in a “third” way.

The drivers of this transformation include an ongoing imperative to own, vying with the factors that oppose this – rising divorce rates, soaring house prices, growing mortgage debt, insecure employment and other circumstances that make it difficult to meet home ownership’s outlays.

Those who use the family homes as an “ATM” are at added risk. This relatively new way of juggling mortgage payments, savings and pressing spending needs makes some styles of owner occupation more marginal – as the tendency is to borrow up, rather than pay down, mortgage debts over the life course.

A retirement incomes system under threat

Since its inception, the means-tested age pension system has been set at a low fixed amount. Retired Australians could nevertheless get by provided they achieved outright home ownership soon enough. The low housing costs associated with outright ownership in older age were effectively a central plank of Australian social policy. 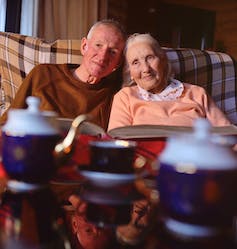 The retirement incomes system was built on assumptions about home ownership that are increasingly unreliable. Evgeniy Kalinovskiy/Shutterstock

This worked well from the 1950s for nearly half a century. But now growing numbers of people retire with a mortgage debt overhang or as lifetime renters grappling with the costs of insecure private rental tenancies.

A shrinking asset base for welfare

Home ownership is retreating at a time when income inequalities are the highest in nearly seven decades and governments are eyeing housing wealth as an asset base for welfare.

Such policy interest is not surprising. Housing wealth dominates the asset portfolios of the majority of Australian households, boosted by soaring house prices. If home owners can be encouraged or even compelled to draw on their housing assets to fund spending needs in retirement, this will ease fiscal pressures in an era of population ageing.

However, the welfare role of home ownership is already important in the earlier stages of life cycles. Financial products are increasingly being used to release housing equity in pre-retirement years. This adds to the debt overhang as retirement age approaches. It also increases exposure to credit and investment risks that could undermine stability in housing markets.

Estimates from the 2014 HILDA Survey wealth module show that the family home makes up nearly half of the total assets owned by single women, compared to 39% for single men. Women are also more likely to sell their family home to pay for financial emergencies.

Hence, women are more exposed to housing market instability associated with precarious home ownership. Single women are especially vulnerable to investment risk when they seek to realise their assets.

However, the policy stance in the wake of the GFC has been “business as usual”. There has been very little real innovation in the world of housing finance or mortgage contract design in recent years. This might change if housing were steered from the periphery to a more central place in national economic debates.

Growing numbers of Australians clearly face an uncertain future in a changing housing system. The traditional tenure divide has been displaced by unprecedented fluidity as people juggle with costs, benefits, assets and debts “in between” renting and owning.

This expanding arena is strangely neglected by policy instruments and financial products. Politicians cling to an outdated vision of linear housing careers that does little to meet the needs of “at risk” home owners, locked-out renters, or churners caught between the two.

The hazards of a destabilising home ownership sector are wide-ranging, rippling well beyond the realm of housing. Part of the answer is a new drive for sustainability, based on a housing system for Australia that is more inclusive and less tenure-bound.

The attractions of interest-only loans