Free exchange: As safe as houses

Banks have been boosting mortgage lending for decades, at the expense of corporate loans 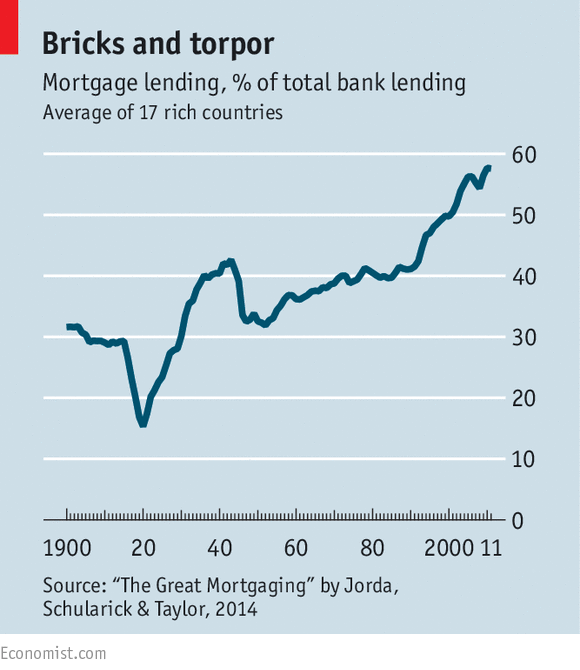 BANKS may be frail and dangerous things, but most economists see them as essential to growth. According to the centuries-old circular-flow model, which tries to explain how money moves between firms and households, it is their job to recycle private savings into business loans. That helps firms invest and grow. Places where spare cash is routinely stuffed under mattresses, in contrast, will tend to grow less fast.

In practice, not all savings make their way into investment. For instance, as John Maynard Keynes pointed out in the 1930s, it is possible to have “savings gluts”—periods when households are more willing to save than firms are to borrow and invest. Ben Bernanke, a former chairman of the Federal Reserve, has shown that scarred banks curtail their lending to companies after financial crises even if they have sufficient funds, inhibiting economic growth. But it is not enough for banks to be handing out cash: just as important, a growing body of research suggests, is where the money goes.

According to a new paper by Oscar Jorda, Moritz Schularick and Alan Taylor, the traditional view that banks primarily lend to businesses is out of date. In 1900 only 30% of bank lending was to buy residential property; now that figure is around 60% (see chart). Since the 1970s virtually the entire increase in the ratio of private-sector debt to GDP around the world has been caused by rising levels of mortgage lending. Corporate borrowing has remained flat. Far from channelling money to companies, modern banks resemble “real-estate funds”, the authors claim, in which long-term mortgage lending is funded by short-term borrowing from the public.

If mortgage lending is so risky, why are bankers so keen on it? The answer lies partly in public subsidies for mortgages, which have boosted home-ownership across much of the rich world. (America is one of the worst offenders, allowing home-owners to deduct the interest on their mortgages from their taxes, as well as insuring most mortgages to shield investors from losses.)

More important, changes to international regulations on bank capital since the 1970s have also increased the supply of mortgages. Under the Basel I rules, which were first adopted in 1988, mortgages were deemed to be half as risky as corporate loans; some national regulators adopted even more skewed risk-weightings. The savings in capital this allowed brought banks higher rates of return on mortgages than on other forms of lending across the rich world. This explains why mortgage lending as a proportion of output has risen even in countries such as Germany and Switzerland, where home-ownership rates have not risen by much since the 1950s. It also explains why central banks the world over have found it easy to stimulate mortgage lending since the crisis, but not corporate borrowing.

Lending through the roof

So how are firms funding themselves since governments and regulators tilted the playing field in favour of home-owners? One of the fastest-growing sources of funds since the 1970s, when corporate loans began to stagnate, has been bond markets. In America, for instance, the stock of outstanding corporate bonds has grown from 11% of GDP in 1970 to more than 70% today.

The growing frequency of financial crises may be accelerating this change. Recent research suggests that firms become more dependent on bond markets for financing during downturns, as banks seek to shrink their balance-sheets. As Fiorella De Fiore and Harald Uhlig show in a new paper, the Great Recession would have been worse if firms had not tapped bond markets when bank lending dried up. Whereas loans to American firms dropped from $4.5 trillion in 2007 to $3 trillion in 2012, bond issuance tripled. Europe and China have seen similar trends.

This growing reliance on bond markets to fund firms has both good and bad effects. Capital-market financing may reduce the impact of company failures on the real economy. As another recent paper shows, over the past 150 years in America, bond-market crises brought on by rising corporate defaults have reduced economic growth much less than banking crises caused by loan defaults. This is because more of the risk is borne by private investors. If a bond defaults, the losses are passed directly to individual bondholders. If a bank loan is not repaid, however, the bank itself must absorb the losses. The insolvency of individual investors does not imperil an entire economy, but that of big banks can.

Nonetheless, as many economists have noted, bond financing is not always better in the long run. Bond investors tend to prefer large companies with proven track records over riskier small and medium-sized firms. That is worrying in a world of slow growth. Historically, smaller firms have had the highest growth rates. They are needed to drive technological innovation and improvements in productivity.

Subsidies and regulations that encourage mortgage lending, in short, have the unintended consequence of stemming the flow of capital to small firms, thereby holding back the economy as a whole. And yet last year America’s federal government announced that it would, in effect, expand its subsidies by insuring mortgages with downpayments as low as 3%. The British government, meanwhile, expanded a subsidy for those buying their first home. Such policies may yield political benefits, but their economic consequences are pernicious.

How making the big banks safer could cost you money