ROBERT MORRIS would have enjoyed the recent American housing boom. A signatory of the Declaration of Independence, he profited handsomely in the 1790s by “flipping” land on the American frontier. His business, acquiring millions of acres from Native Americans and friends of the crown and then selling them on to speculators, probably made him the richest man in America until dearer credit left him bankrupt. In a new paper Edward Glaeser of Harvard University argues that America’s long history of property manias has lessons for those aiming to minimise the pain of future busts. In particular, exuberant buyers may be more rational than many assume. 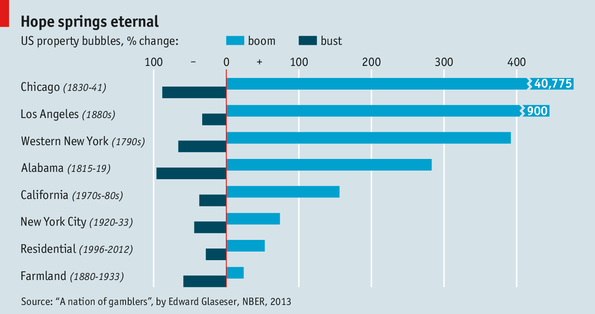 Robert Shiller, a Yale University economist and prescient housing-bubble spotter, reckons that “animal spirits” animate investors during bubbles. He sees America’s recent housing boom as an especially bad case of irrationality. Yet Mr Glaeser notes that the episode fits comfortably within America’s speculative past (see table). And assumptions of irrationality may let economists off the hook too easily. In fact, he writes, booms are often consistent with reasonable beliefs about the future—an important fact for bubble diagnosticians to note.

On sensible reckoning, for example, agricultural land in Alabama was a steal in the 1810s. Cotton production on Alabama farmland was highly productive, and cotton prices were surging on demand from British textile manufacturers. In 1817 land sold at about $35 per acre (in 2012 dollars), twice the national average for unimproved land. Prices almost quadrupled to $134 per acre the next year. Even those values implied large profits at going cotton prices, suggesting land remained a good buy. Yet when recession struck in 1819, farm prices dropped and leveraged buyers went bust. A prolonged price slump followed; by 1850 land cost just $5 per acre. Optimism, though warranted, led to financial carnage.

The Chicago boom of the 1830s reached even greater extremes. At the time, water access was critical to trade. In 1816 it cost as much to move goods 30 miles over land as to ship them across the Atlantic Ocean. Land near key ports and shipping routes was therefore extremely valuable. The Erie Canal led to economic booms around the Great Lakes, and Chicago’s proximity to the Mississippi river system made it an attractive bet. In 1830 Chicago land went for a song at $800 per acre (in 2012 dollars). In just six years the value soared to $327,000 per acre, with some plots fetching $1m. Tighter international credit conditions led to panic in 1837. By 1841 prices had fallen back to $38,000 per acre.

Yet this was more a product of unpredictability than irrationality. Given the risk that Chicago might fail to become a great metropolis, values immediately after the crash look low but justifiable. Prices at the peak were also consistent with reasonable views. At the time Chicago’s prospects looked uniquely bright. Land values in 1836 made sense given the defensible assumption that Chicago prices would rise to a fourth of those in New York city. And, Mr Glaeser notes, people who bought and held land through the crash prospered over the next two decades: average annual returns through to 1856 were about 9%.

In his seminal history of financial manias, the late Charles Kindleberger noted that unexpected good news or optimism often provides the beginnings of a bubble. Mr Glaeser argues that America’s booms fit the pattern. The unknowable impact of new developments, like the settlement of the frontier or the advent of the skyscraper, motivates optimistic property bets.

If investors are not irrational, they may nonetheless fall prey to a dangerous nearsightedness. Over the long run high prices lead to more supply, a dynamic often forgotten in the heat of a boom. Alabama’s land rush rested on expensive cotton. But dear cotton led to an explosion in world production. As a result cotton prices dropped by 50% between 1818 and 1820, reducing expected profits on typical Alabama land by roughly 90%. American agricultural land boomed and busted again in the early 20th century in response to similar movements in wheat prices. Dear wheat led to land booms but also encouraged the rise in yields that eventually popped the bubble.

Urban real estate is just as vulnerable. New York and Chicago boomed in the early 20th century. Adjusted for inflation, land values in New York City leapt by more than 50% in the 1920s, buoyed by high rents and new high-rise technology that boosted the earning potential of a single property. Investors were slower to appreciate skyscrapers’ effect on supply. The erection of 50-storey buildings on just half of Chicago’s Loop business district would have generated a tenfold increase in its 1933-era square footage. In practice, it took less construction than that to send prices down.

New supply also helped to check America’s most recent housing spike. Suburban home prices soared despite America’s almost unlimited capacity to build. As Mr Glaeser quips: “The entire country could fit in Texas with more than one acre per household.” Rising prices in tight markets eventually weakened in the face of the construction boom they helped to stimulate.

Although easy credit is a common thread in America’s property history, low interest rates are unfairly maligned, Mr Glaeser reckons. Booms have occurred amid rising, falling and flat rates. The underpriced option to default looks more dangerous. An 1800 land act allowed buyers of public land to post a fraction of its cost upfront and delay payments for two years. That created a window for buyers to observe prices before deciding whether to pay or default, making land bets far more attractive. Mortgage securitisation was a new fad in the 1920s and unwary investors may have underappreciated the risk of default. Zero-down mortgages and federal guarantees probably played a similar role in the 2000s. Americans are incurable property gamblers, history suggests; best not to subsidise their wagers.

Putting an end to commuting

Six years of low interest rates in search of some growth